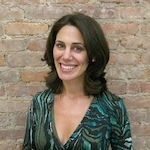 Rachel is a writer and social entrepreneur based in New York. She is the co-founder of Change The Ratio, which seeks to increase visibility and opportunity for women in tech and new media (and, really, wherever ratios need changing, but you gotta start somewhere!). A former lawyer who writes about media, politics, culture & technology, she is the Editor-at-Large at Mediaite.com and was a founding editor at both Mediaite and the Huffington Post, where she launched the "Eat The Press" section as HuffPo's first standalone vertical. Her writing has appeared in publications like the New York Times, Newsweek, The Daily Beast, Glamour and many others and in numerous anthologies on extremely random subjects. She speaks widely at conferences, on panels and on TV. (She is also the co-host of "The Salon" on the Jewish Channel -check local listings!).

The Hunger Games: A $100 Million Bet on Women as Leaders