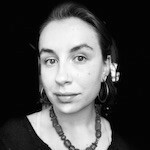 Lucy Westcott is a journalist based in New York City. She is currently the James W. Foley Fellow at the Committee to Protect Journalists (CPJ), where she's conducting research on safety issues for women journalists in non-hostile environments. Prior to joining CPJ, Westcott was a staff writer for Newsweek, where she covered gender and immigration. She has reported for outlets including The Intercept, Bustle, The Atlantic, and Women Under Siege, and was a United Nations correspondent for the Inter Press Service. As a fellow with the International Reporting Project in 2016, Westcott wrote about gender and development in South Africa and Lesotho. She has reported from Egypt, Jordan, Cameroon, and the U.S. She has a master's in multi-platform journalism from the University of Maryland, College Park, and a bachelor's degree from the University of Sussex in the United Kingdom. In her spare time, she enjoys trivia, running, and volunteering with cats.

Chris Palma Transitioned at His Company, and Then Helped Create a Policy to Support Other Transgender Employees