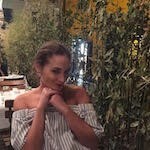 Claudia Pou is an award-winning multimedia producer with more than 12 years of experience. She has produced for Bloomberg, ABC, Univision and most recently Fusion, where she developed an award-winning program. A graduate of Vanderbilt and Northwestern's Medill School of Journalism, Pou began her career in television at the age of 18, and by 20, was co-producing newscasts for Nashville's NBC affiliate. She is a native Spanish speaker.

Want to Break Into the Finance Industry? Here's How