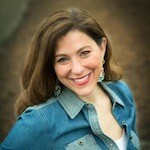 Carrie Kerpen is the co-founder and CEO of Likeable Media, a global content studio that was named Crain’s sixth Best Place to Work in NYC. She is the author of WORK IT: Secrets for Success From the Boldest Women in Business and a columnist for Inc. and Forbes. Carrie has been featured in The New York Times, ABC World News Tonight, FOX News, and CNBC. She has keynoted conferences in London, Las Vegas, Mexico City, and New York, among others. Follow her @carriekerpen.

I Sent a Celebrity a Note While on the Same Flight...and Now She's in My Professional Network