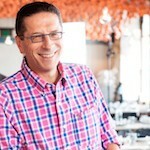 Alex Malley FCPA is the chief executive of one of the world’s largest accounting bodies, CPA Australia, and author of the best-selling professional mentoring book, The Naked CEO. He also hosts the Nine Network Australia television series, The Bottom Line. The interview he conducted with the first man on the moon, Neil Armstrong, was the most substantive ever filmed; news surrounding it reached an unprecedented global audience. From suspended schoolboy to disruptive CEO, Alex Malley always does what he believes in.

This Secret to Standing Out in Interviews Is Almost Too Obvious