4 Tips for Landing Your First Civilian Job, From Military Veterans Who’ve Been There

by
Anne Shaw
Sponsored by BlackRockshow me more 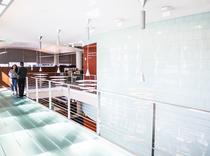 Terrance Anderson likens the military-to-civilian transition to jumping into a whole new ocean.

“There are so many different swim lanes, so many options,” he says. Currently a vice president at global investment firm BlackRock, Anderson is the program manager for the firm’s client experience platform. But prior to his finance career, he served in the United States Marine Corps.

Anderson’s colleague, Aaron Lehn, a fellow Marine veteran and a director of institutional sales within BlackRock’s Retirement Group, points out how overwhelming transitioning to the civilian workforce can feel: “You enter a brand-new field, with a brand-new culture, in a brand-new environment.”

Ideally, he says, military service members should begin preparing for this transition well before they leave the service. We asked Lehn and Anderson for their best advice on how to do it successfully.

Think about not only your skill set and personal strengths, but also where you’ll most likely find fulfillment and meaning.

When it comes to personal strengths that will help you succeed in the workplace, consider this thought from Lehn: “Most veterans have, in some capacity, been responsible for lives and millions of dollars’ worth of equipment, while supporting missions critical to our national security—and all very early in their lives. They've proven that they can perform under high pressure and, sometimes, under the worst possible conditions.”

He notes that this not only shows adaptability, but the ability to thrive in unpredictable, kinetic environments—a competitive advantage in business, especially finance. Veterans can also cite their teamwork, collaboration, and problem-solving skills. Give thought to which key skills you should add to your resume and which anecdotes you could share during an interview to illustrate them.

And when it comes to the type of job you’d like to do, or even which industries you’d enjoy, remember Lehn’s guidance. “You don’t need to know right off the bat exactly what you want to do for the next 40 years. Look for something that piques your interest and get in the game.”

Lean On Your Network

Anderson points out that networking can be a good way to further explore what you might like to do and where you could find success. When his own transition to civilian life was nearing, he reached out to his Marine Corps network. Through his conversations and inquiries, he learned that his ground supply experience would translate well to supply chain roles in the civilian workforce. But after hearing more about the work others were doing, he also realized he had more interest in the financial sector.

With the help of his Marine Corps connections, he ended up landing his first job at accounting firm PwC, but he didn't stop there. He applied to join the American Corporate Partners (ACP) mentorship program, which introduces veterans to mentors in their desired field. His mentor worked for BlackRock, and three years after they first connected, Anderson received a job offer to join BlackRock’s platform innovation team.

“Most veterans are open to helping others, so reach out to them. Ask how they navigated their transition and what they’ve achieved since,” he advises. “Ask what types of roles they looked for and took on, and how they were successful. It’s a great way to find out what's possible and better understand the civilian sector before you jump into it.”

Lehn created a mini advisory board of sorts from his roster of connections while he was transitioning from military service. “People are usually willing to help you,” he says. “Just be respectful of their time, transparent about what you’re trying to do, and grateful for their assistance. Reach out to as many touch points as you can.”

Lehn and Anderson both pay it forward by serving in BlackRock’s Veterans Network.

“Through this network we speak with veterans on a weekly basis,” Lehn explains. “We act as a sounding board, suggest ideas, and direct them to transition programs”—like the ACP mentorship program. And, Lehn says, “We remind them that the same focus and perseverance that helped them succeed in the military will also help their business career.”

BlackRock’s Veteran Network not only aims to support all veterans around the globe who are about to embark upon or are in the midst of their transition to civilian life, but also to smooth the way for its own newly hired veterans starting their civilian career at BlackRock by helping them adjust to their new industry, organization and culture. “We get what they're going through,” Lehn says.

“Once you hone in on an industry, research companies to see which ones have programs for veterans and try to connect with them,” says Anderson. If you discover an interest in a particular industry, company, or role, start learning everything you can about it, so you'll be knowledgeable when reaching out to potential contacts and during interviews.

“Let’s say you’re interested in finance,” says Lehn. “Show a good understanding of the markets and global issues. Research the companies you’d like to work for and their competitors. Then develop an idea of how you could make a positive impact on an organization in that space.”

Anderson suggests looking into larger companies at first because they typically offer more robust and structured training programs, valuable online learning resources, and veteran support programs. Many even publicly share veteran hiring goals and partner with outside organizations like ACP to support and hire veterans. (It also doesn’t hurt to add recognizable, reputable names to your resume!)

After you’ve identified a few companies you’re interested in, use LinkedIn to find veterans who already work there and can offer more information.

Look into programs that actively recruit vets, such as Hiring Our Heroes. This program places military members in civilian externships during their last three months of service, and offers resume-building support as well as an avenue to further discover the type of work you might enjoy and how your skills align with various business areas.

“Hiring Our Heroes offers a good discovery process,” Anderson says. “It’s a nice way to dip your toes in the water before you commit to a direction.”

Lehn’s parting advice? “It may feel like a winding road to secure your first job, but there are plenty of resources available. Take advantage of transition programs like ACP and Hiring Our Heroes. And stay connected to your fellow service members, so you can pay it forward when someone asks you for help someday.” 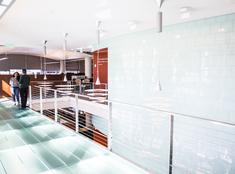 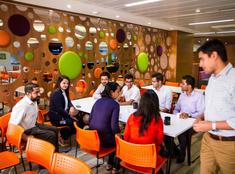 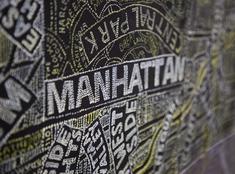