Inside the White House: An Interview With Jodi Kantor, Author of The Obamas 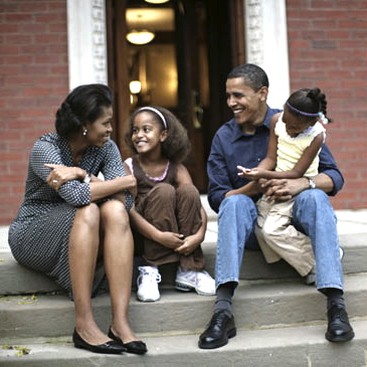 Political affiliations aside, anyone watching the current election coverage can agree that the path to the presidency isn’t easy. And as a Washington correspondent for the New York Times, Jodi Kantor has seen first-hand the hardships of becoming the most powerful politician in the county. Since 2007, Kantor has been covering the Obamas, following their rise to the White House and the successes and failures they’ve faced throughout the term.

Kantor recently compiled her extensive findings in a book, The Obamas, which takes an in-depth look at the inner workings of the White House. From interviewing some of the Obamas’ closest friends and political advisors to the First Couple themselves, the book reveals the struggles the First Family faced as they adjusted to living in the harsh glare of the world's spotlight.

We recently caught up with Kantor to talk about the advice she believes we can take away from the First Family. From the personal traits that have helped and hurt President Obama’s political career to his surprising rule that makes sure he’s able to fit family time into his schedule, there are certainly many lessons of political life that any of us can apply.

Whether or not you agree with the Obama administration’s policies, the President’s success in 2008 was undeniably one for the history books. What are some lessons we can learn from watching the President in action?

The president has amazing confidence. He had the confidence to envision himself as President of the United States, to take on Hillary Clinton when she represented the Democratic establishment, and to launch the race that won the 2008 election.

What we often see, though, is that the President can sometimes be a little overconfident. His expectation of his own ability to fix some of the country’s most intractable problems was a little high. He suffered from that once he got to the White House. One of the reasons his first term has been difficult is because the promises he made were so outside. And on some of them, he’s had a lot of difficulty delivering.

Your book also focuses a great deal on the First Lady. What can we learn from her?

Michelle Obama’s story is of her mastering a job, a field that did not come naturally to her. In my reporting, I really discovered that her initial time as First Lady, the first year or two, was far more difficult than advertised. Being First Lady is a ceremonial position, an important position. She went to talk to some school kids very early in her time at the White House and one of them said, “I want to grow up to be First Lady.” And she said to the little kid, “It doesn’t pay much.” So part of the story of my book is her learning to adapt to and even master a role that really wasn’t easy for her.

Your book gives a behind-the-scenes look at some of the tensions between the East and West wings, even citing incidents that may shock people. Can you explain what the work environment in the White House is like?

People there are under just incredible pressure. It doesn’t really compare to anything else I’ve seen in any other workplace environment. You know, the New York Times is a fairly high-pressure place, and it doesn’t begin to compare to the kind of pressure in the White House.

And so people behave in really outside ways in that environment—I’ve found that lots of times in my book reporting. There’s a scene where [former Press Secretary, now Senior Campaign Advisor] Robert Gibbs really explodes in a meeting and he uses an expletive in reference to the First Lady, which is something that probably wouldn’t happen or even be tolerated in a lot of workplaces.

Wow! While most of us aren't facing that level of pressure, one relatable struggle the First Couple faces is trying to balance their stressful schedules with family time. Do you think they have been able to do this well?

They have been able to do it well, although in a way it’s actually caused quite a disagreement in Washington. The President, from the start of the administration, hasn’t had a lot of time to spend with his family. But at 6:30 PM, he goes upstairs and has dinner with his family. I discovered in the course of my reporting that—under normal circumstances—he’s only allowed to miss dinner twice a week.

Talking to readers about that, I’ve learned that people were of two minds. Some readers said, “It’s terrific that he does that, and if that’s what he needs to do to stay sane in the course of the Presidency, God bless. And by the way, it’s nice that his commitment to his family is authentic and not just something he uses on the campaign trail.” Other readers had a different kind of response, basically saying, “Look, I have to miss dinner with my family plenty and I have a regular job, and I want the President to be working all night.”

Also remember that the President has been heavily criticized in Washington for being too introverted. This is not a president who schmoozes with Washingtonians that much—he’s considered pretty introverted and there are some interesting questions about whether he would have benefited from spending more time out and about.

And I have to get in at least one question about the First Lady's fashion sense! Michelle Obama has become a style icon, but you mention that she has struggled with the message her clothing may send to the public. What can we take away from her style hits and misses?

She understood very early on the importance of visuals, and there are even times she seems to say things with her clothing that she can’t say in words. Where it was sort of politically controversial is during the periods earlier in the administration, when she was wearing pretty lavish, pretty expensive clothing at a time of real economic suffering. She’s actually scaled back a little bit now.

And on the one hand, she of course wanted to look great because she was in the public eye, but on the other hand, there were people even within the administration who were concerned that it looked insensitive, that it didn’t send the right message. Remember that Republicans were attacking the President, however unfairly, for being an out-of-control spender. So even though the federal deficit has nothing to do with what dress Michelle Obama wears, they were trying to make this argument that the Obamas were not careful with money. Part of what’s interesting is that as the First Lady has become more politically attuned, she has become more disciplined about what she wears.

The Obamas is now available on Amazon.

As a freelance multimedia journalist, Colleen has spanned the globe with her camera in hand to share unknown, interesting, and inspiring stories. Some of her most recent pieces have taken her from Thailand, where she spent a night on an uninhabited island, to Australia, where she covered a rare disease affecting Tasmanian Devils. She started her career at NY1, reporting on major stories including Hurricane Sandy and the 2014 mayoral elections.