Here's the Real Benefit of Getting Close to Your Co-workers

by
Bill McCool
Sponsored by T-Mobileshow me more 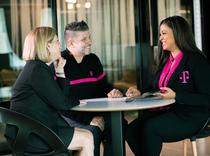 You’re at work for 40 hours a week—sometimes even more than that. But how well do you really know the person sitting next to you?

Building trust among co-workers fosters a more inclusive culture and helps build a community within your team. And that’s critical to doing your best work. When you trust your co-workers, you work better together and are more productive.

Joy Stanfield knows firsthand how powerful it is to build trust in the workplace. Stanfield came out to her friends and family when she was 18, but at her first full-time job, she was very much in the closet at work. Her employer had no clue she was gay or had a girlfriend, and it was commonplace to hear co-workers or leadership in the company make homophobic jokes. “It was a terrible environment to work in,” Stanfield says, “and to be honest, I just thought that’s the way I would have to live my professional life.”

Fast forward to today and Stanfield has 13 years under her belt as a Customer Success Representative at T-Mobile. “When I came here, I was shocked,” she admits. “I had two openly gay trainers, who talked freely about their lives. It was a culture shock for me. I didn’t even realize this was possible. I knew I’d found my home.”

Since then, Stanfield has worked her way up to become a Team of Experts Manager in Chattanooga, TN, where she oversees a crew of 40. She’s also experienced firsthand how leaning into inclusivity can create a thriving community. Here, she shares what she’s learned about creating trust and building an inclusive culture.

The first step, according to Stanfield, is to collaborate as a team on decisions—big and small. “We get together as a big group or a small group, and we talk and get everyone’s perspective so we don’t miss anything,” she says. Making sure that everyone has a voice is key to building trust.

When you get to know your co-workers on a personal level, you can better understand their perspectives and their day-to-day lives—and that creates a lasting bond. Stanfield believes that’s the best way to form a relationship built on trust.

“As a leader, it’s important that [employees] trust me enough that I can be their sounding board,” she says. “When you look at a call center, it’s kind of like a small town. We all know each other, or at least know each other’s names. We have people we’re close to and we have people that we know we can go to for advice.” Stanfield makes sure her employees and co-workers know she falls into the latter category.

Team outings can also help build a cohesive unit, whether you’re going out into the community to volunteer or you’re just planning a departmental picnic. “I think you see people differently when you get a glimpse into who they are outside of work,” Stanfield says.

It’s also important to create space for employees to be who they are. A great way to do that is to support your team members in joining employee resource groups that speak to them. In Stanfield’s case, that has meant, for example, not only encouraging a customer service representative on her team to take part in a Women’s Leadership Network, but carving out time in the rep’s work schedule to allow her to attend meetings.

For Stanfield, T-Mobile’s Diversity and Inclusion Networks (one of T-Mobile's employee resource groups) are important because of the opportunity they offer to connect with others. “I like being a mentor to the people in the call center and in the company,” she says. “I think I have a different perspective because I’m little older than a lot of our workforce. I’ve been through what a lot of them have been through as a woman, and as a gay woman. So it means a lot to me to be able to help guide them through not just their professional lives, but their personal lives as well.”

One of the undeniable joys of getting to know your co-workers and building a community in the workplace is that you get to see the person sitting next to you transform, not just in how they develop during the course of their career, but through the whole of their life.

“My favorite part about being here is seeing people grow,” Stanfield says. “I’ve seen so many people buy their first homes, buy their first cars, have children, and achieve their dreams.”

In fact, Stanfield herself has grown during her time at T-Mobile in both her career and her life: She met her wife there a decade ago, and because of their benefits, was able to have a son—a story she’s proud to share and hopes will inspire others around her.

“I like to see other people’s dreams come true, and I like to pour back into that,” Stanfield says.

T-Mobile is a place for collaboration, creativity and fast-paced change. As the Un-carrier, and America's most loved wireless company, their 50,000 plus customer-obsessed team members are united in their mission to build the future of technology and change wireless for good. 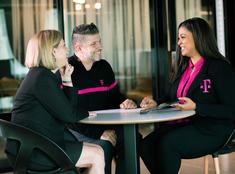 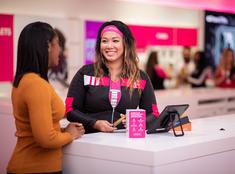 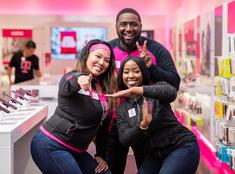