10 Sites to Keep You Laughing in the New Year

The holidays are supposed to be full of cheer and gay apparel, but they can also be one of the tougher times of year. If crowded airports and Aunt Mildred’s fruit cake have you feeling a little under the weather, just remember that laughter is the best medicine, and you can get more than your daily dosage online.

Here are the 10 humor sites that topped my list this year—and will keep you giggling long into the next one.

One of the funniest sites on the Internet, TFLN sets itself apart from copycat sites with its scrupulous and nuanced curation. The site receives 3,000 to 5,000 text message submissions a day, and the editors narrow it down to just a handful of comical gems. “I've read more than two million text messages,” explained TFLN editor Philip Bator. “I tend to look for the texts that someone can either relate to or aspire toward. I’m not judging—only laughing.” For better or worse, TFLN is creating an archive of the millennial generation, 160 characters at a time. Twitter: @tfln 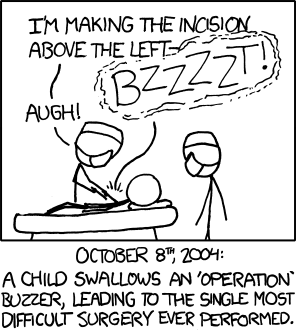 This simple little web comic features expressive stick figures dripping with sarcasm and nerdiness. Creator Randall Monroe incorporates math, science, language, and romance into his work—there’s an xkcd for every occasion. For extra laughs, he even sneaks in some tongue-in-cheek social commentary.

Runner Up: The Oatmeal

For those of us with big thumbs and poor spelling, auto correct can be a huge time-saver—until the “smart” technology turns against you. Damn You, Auto Correct is a catalogue of the myriad ways your mobile phone can humiliate you. If its Best Of page doesn’t make you laugh, nothing will. But don’t forget the golden rule of autocorrect: It only autocorrects it because you’ve typed it before. Twitter: @damnyouac Only six months old, this Tumblr blog stands out in the celebrity blog zeitgeist. Written in the fictional voice of Tom Cruise and Katie Holmes’ five-year-old daughter Suri, the Burn Book is dedicated to “the people who disappoint her.” If you love to hate spoiled celebrity children or their obnoxious celebrity parents, this is the blog for you. Twitter: @surisburnbook

Runner Up: Look at This F*cking Hipster

The Nostalgic Photo Award: Young Me, Now Me

Comedian Ze Frank created this open-sourced photo project and introduced it to the world in his delightful 2010 TED talk. Check out people’s recreations of their retro photos, which can be touching, funny, creepy, or downright impressive.

The Too-Close-to-Home Award: Clients from Hell

Anyone who’s ever felt like they were taking crazy pills at work will love this collection of anonymous client horror stories (designers, programmers, and management consultants, I’m looking at you). If you’re dreading going back to work after the holidays, cheer yourself up with some Schadenfreude—and be glad your clients aren’t this bad. Twitter: @clientsfh

This one is pretty straightforward: Readers send in photos of everyday objects that just happen to look like male genitalia. Always good for a chuckle—and usually a cringe. Twitter: @accidentalpenis Whether or not you loved the new Jay-Z and Kanye album (I have come to love it), this Tumblr will make you smile. In the spirit of lolcats captions, Watch the Cradle plasters photos of toddlers with lyrics from the “Watch the Throne” album. No one knows what it means, but it’s provocative.

Offshoot of the hipster publishing house by the same name, McSweeney’s Lists is a collection of witty lists, all written in the requisite ironic tone. Obnoxiously clever though they may be, McSweeney’s Lists are always good for a laugh about everything from your upstairs neighbors to ugly clothing. History nerds rejoice—at last, there’s a humor site for you! Presidential Pick-Up Lines tests how well you were paying attention in high school civics class by turning presidential factoids into a non-stop “that’s what he said” party. Get ready to blush, because some of these are pretty racy. File under: Reasons to Study.

Runner Up: Being Gay is Gay

In light of the recent death of everyone’s favorite evil dictator, the days are numbered for the blog mockingly dedicated to the wistful stare of North Korea’s late leader. The editors claim they’ll keep publishing as long as the photo archive lasts, but for those who need their daily fix of gazing Kims, a Tumblr for Kim Jong Il’s successor is already up and running.

Did we miss your favorite source for online smiles? Let us know in the comments.