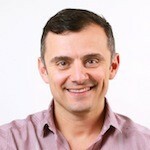 Gary Vaynerchuk has built businesses all his life: In his 20s, he grew his family liquor store from $3 million to $45 million in 5 years, launching WineLibrary.com, one of America's first wine e-commerce sites. In 2009, he co-founded VaynerMedia, a social-first digital agency which helps brands market in the year we live in. An angel investor and adviser to some of the most successful tech startups since social media’s early days, Gary has counseled and invested in more than 50 tech startups including Twitter, Tumblr, Medium, Birchbox, Uber and Venmo. In 2014, Gary launched $25 million seed fund VaynerRSE to continue his successful investing career.

Behind Every Overnight Success Story Is Someone Who Worked Really, Really Hard

Here's the Simple Secret to Motivating Your Employees (Hint: It Doesn't Include a Raise)

Always Act Like Your Bosses Are Watching You (Because They Are)

The Simple Conversation That Will Cure Your Fear of Failure

To Change Your Life, Stop Saying "But"

The Secret to Getting the "Hustle" You Need to Succeed