Interviewing for a Job

On a Roll: 3 Job Search Lessons from Food Trucks 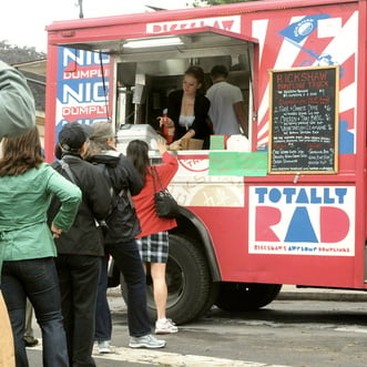 Food trucks (or “vehicles of yumminess,” as I like to call them) are all the rage these days. Started by culinary entrepreneurs, they roam the streets offering everything from tacos to crème brûlée. I'm a little obsessed with them, but I’ve also found from studying and following them (read: eating absurd amounts of food), that you can learn some great job search lessons from these little trucks. Next time you’re munching on your meal, here’s some food for thought.

Most food trucks don’t have a huge menu and instead focus on few dishes that they know very well. In Portland, Oregon, Thai food truck owner Nong Poonsukwattana goes so far as to serve only one dish (a common practice among Bangkok's street vendors). Nong says she does this because she wants to “be kick-ass” at that one dish. Food truck owners recognize the value of focusing on a few dishes that they can perfect, rather than spreading themselves too thin by making a large selection of mediocre dishes.

During your job search, remember that focusing your efforts on the best positions for you will do you better than scattering your energy too broadly. Opt for quality over quantity. Don’t spend time sending out 50 cover letters a week—instead, focus on a few jobs that you’re interested in and would be a great fit, and invest your time crafting an amazing application that will make you stand out from the crowd.

2. Social Media is Your Friend

Social media is an incredibly valuable tool for food truck owners, who often rely on Twitter to keep their followers updated on where they'll be parked that day. In this sense, people “follow” the food trucks in the most literal sense. Curtis Kimball, better known as San Francisco’s Crème Brûlée Man, uses Twitter to broadcast his cart’s location and the flavors he’s serving that day. What started as a side gig turned into a full-time job, due largely to Twitter—he gained 12,000 followers in his first year alone.

When you’re in the market for a new job, it’s important to spend time leveraging the full power of social media. It’s a great way to tap into your existing social network and to make new connections (both of which could ultimately lead to a job). And, just like food trucks do, don’t be shy in letting your followers know what you’re up to. Update your LinkedIn profile, email your network, and use Twitter to share your most recent accomplishments and let people know you’re on hunt for new opportunities.

3. Saying “Thank You” is Important

When I tweeted about Boston’s MeiMei Street Kitchen’s delicious “Double Awesome” scallion pancake sandwich, I was surprised when someone actually tweeted back to thank me. But the three siblings who run MeiMei (Mei, Andy, and Irene) tweet “thank you” messages to anyone who tweets about their food, which really makes their customers feel special and makes the whole “dining” experience more memorable.

Whether you’re interviewing for a job or simply networking, it’s always important to send a thank you note—be it via the post office, email, Twitter, or carrier pigeon—to express your appreciation and enthusiasm. Just like showing a customer that you care about his or her business, expressing your gratitude to a potential employer can show that you’re enthusiastic and help you stick out from the rest of the crowd.

Next time you’re struggling with your job search, go find the closest food truck, sit down for a delicious meal, and think about how you can apply these lessons to your own job hunt. And, of course, enjoy.

Nina Tamburello is a freelance writer and communications assistant. When she’s not reading about food, following food trucks or trying out new restaurants, you can find her traveling, learning French, or watching cheesy ‘80s crime dramas and plotting her escape from Boston’s brutal winters.